Cannibal Penguin is a comical and sarcastic French “fuck metal” and punk-rock band founded in 2010 by philosopher Yann Kerninon. The band went through various metamorphoses and finally stabilised in 2016 as a power trio (guitar/vocals, bass, drums) with Enzo, Maxime and Yann. Cannibal Penguin is the first band to have published a book before releasing an album.

Cannibal Penguin is the first, the last and therefore the greatest penguin fuck metal band in the history of rock’n’roll.

Formed in 2010 by philosopher Yann Kerninon (vocals, guitar), the band became a power trio in 2016 with Maxime Mousserin (drums) and Enzo Murelli (bass).

The compositions are original and the lyrics are mainly written in French, but also occasionally in English, German or pretend to be singing in English. Cannibal Penguin likes to play on the register of absurdity, comedy and parody (including a few hits) while sketching in the background a more serious, even tragic subject

The first band to release a book before releasing an album. 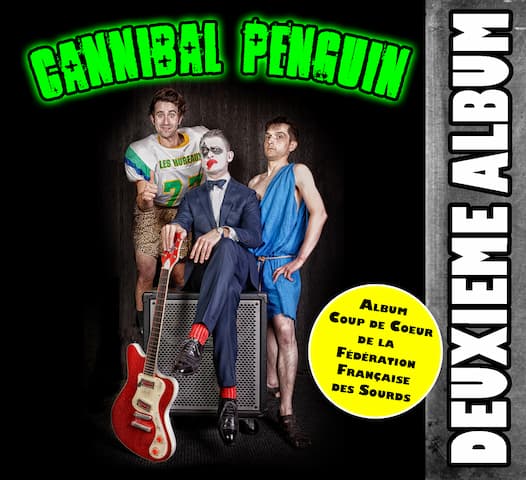 In 2016 is published Yann Kerninon’s book L’Odyssée du Pingouin Cannibale (Buchet Chastel), relating the birth of the band while constituting a philosophical essay on the absurd. In 2017 Cannibal Penguin self-released their first album (which is not really an album) entitled Deuxième Album (because, anyway, the first one is always a bit of a failure).
In 2019, a second philosophical essay, Sauver le Monde (Buchet Chastel) is published, which also mentions the adventures of the trio. The release of this book is the occasion of a mini-tour, the ‘Sauver le monde Tour’, which will conclude with a first international concert in Münster, Germany. 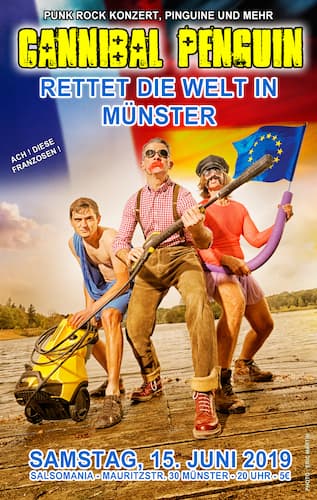 Cannibal Penguin has produced half a dozen videos made entirely DIY, all of them has been successful on social networks. The video for the song Punk Centriste has reached 300,000 views on Facebook and Youtube. The clip Moquons-nous des handicapés was shot with 150 disabled persons and their families with the support of the association Les Papillons Blancs de Paris. The video Au Tour de Montcuq was shot at the Vélodrome de Saint Quentin en Yvelines in collaboration with the cycling magazine 200 – “Le vélo de route autrement”.

In 2020, on the recommendation of Didier Wampas, Yann Kerninon approached the excellent sound engineer Arnaud Bascunana for an album project. Naturally, Arnaud spoke to Paul Bessone, who discovered the group’s universe while watching a conference given by Yann Kerninon: L’Odyssée du pingouin cannibale at the University of Roskilde (Denmark) on the occasion of the World Francophone Day.

Cannibal Penguin is the first band signed by Juste Une Trace before having the tracks recorded. It was all done by simply talking, exchanging and exposing the subjects of the tracks and the way the label likes to produce and work.
To illustrate this relationship, Paul Bessone asked Yann Kerninon what the new album would be called. The answer was clear: “we don’t know”. So the album is called CANNIBAL PENGUIN NE SAIT PAS. It will be released at the end of September in 2022.

Yann Kerninon, magician, scriptwriter, author, composer, singer and guitarist, is the founder and leader of Cannibal Penguin. He holds a master’s degree in management, but in 1997 he radically changed his career to philosophy. A philosopher in the field, he is the author of a dozen published philosophical essays. He founded and chairs the “Field Experience” programme at ESSEC, which sends more than a thousand students from this leading business school to factories, Emmaus homes, refugee camps and communities of mentally handicapped people every year. Yann Kerninon also gives around thirty lectures each year in France and around the world on philosophical issues.

Maxime Mousserin has a degree in molecular biology and constitutional genetics. In 2008, he get a scholarship which he spent entirely on buying drums. Following a myocardial infarction in 2010, he paused his studies for a few months and then obtained a master’s degree in analytical chemistry. He is now a sales executive in the medical diagnostics industry at Elitech, the leading Covid test supplier in France. He is still the drummer of Cannibal Penguin.

Enzo Murelli has been driven by the desire to drive trucks since he was very young, and at the age of 17 he obtained a heavy goods vehicle licence which is normally obtained at the age of 21. From the age of 18 to 20 he drove the trucks of his dreams but became aware of the limits of this profession. He then joined the family business, Guitare Village, became a guitar salesman and started playing the double bass. Occasionally, he delivers for Inconpliance, Hermès handbags at 200.000 Euros in Hong-Kong. He is the bass player of Cannibal Penguin.

Cannibal Penguin is a comical and sarcastic French “fuck metal” and punk-rock band founded in 2010 by philosopher Yann Kerninon. The band went through various metamorphoses and finally stabilised in 2016 as a power trio (guitar/vocals, bass, drums) with Enzo, Maxime and Yann. Cannibal Penguin is the first band to have published a book before releasing an album. 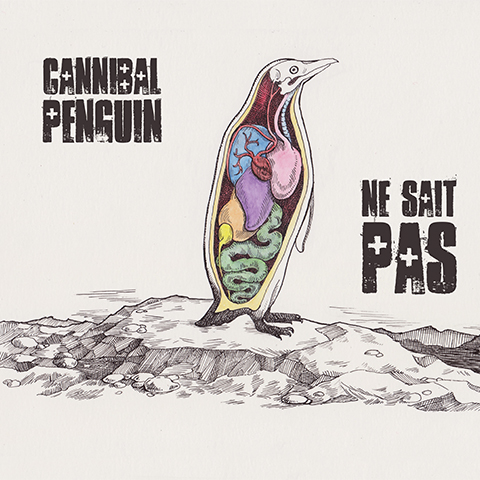