In 1988, in Paris, the double bassist Gary Brunton met the pianist Bojan Z while they were studying in a famous music school. At night, in the capital’s jazzclubs, they would listen with joy, to drummer Simon Goubert. In 2018, the three partners met again and started working together on Brunton’s compositions. Everything is spontaneous, sincere, simple and delicate… Perhaps this is what friendship is all about.

GARY BRUNTON
Born in Burnley in the North West of England in 1968. He discovered the electric bass at 15, inspired by the sound of Jean Jacques Burnel of the Stranglers.
In 1986 at the age of 18 he moved to Wales to study at Swansea University. Local musicians such as saxophonist Jonathan Lewis and pianist Russ Jones introduce him to other styles of jazz. He discovers the universe of Bill Evans, and musicians such as Joe Henderson, George Mraz and Ron Carter.
In 1988, he moved to Paris to study at the thriving CIM jazz school alongside other young talented musicians such as Pierre Christophe, Daniel Garcia Bruno and… Bojan Zulfikarpasic. In the summer of 1989 he decided to stay in France.
In 1990 he performed in trio with Chet Baker’s pianist: Michel Grailler. He played in Nöel Akchoté’s first quartet with Julien Lourau and François Merville and followed by private lessons with Henri Texier, Pierre Michelot, Dave Holland, Gary Peacock and Ray Brown.
In 1993 he formed a trio with pianist Edouard Ferlet and drummer Gregor Hilbé.The trio expanded to become the «Upper Space Group» with Stéphane Belmondo on trumpet and François Théberge on saxophones.
In 1997, Gary Brunton start writing music. He formed a quartet with baritone saxophonist Jean Charles Richard, violinist Johan Renard and drummer Laurent Bataille. The quartet became a sextet «Brunt’Off» with the addition of Eric Löhrer on guitar and Edouard Ferlet on keyboards. Frédéric Norel et Luc Isenmann soon replaced Johan Renard et Laurent Bataille respectively.
Since 2007, he has played with many musicians and he formed the Pee Bee with Swiss/Italian saxophonist Claudio Pallaro: A large jazz ensemble, creating music collectively, and also performing with other forms of artistic expression such as dance, painters and slam poetry. He has also recorded and toured with American singer Sheila Jordan.

BOJAN Z
He started playing and studying piano at the age of 5. As a teenager, he played in bands on Belgrade jazz scene, where he received an award as the Best Young Jazz Musician of Yugoslavia award in 1989. In 1986 he studied with Clare Fischer at the Blue Lake Fine Arts Camp (Michigan). He moved to Paris in 1988, studied at CIM where he met Gary Brunton. He played with Henri Texier, Michel Portal, Noël Akchoté, Julien Lourau, Magic Malik, and other renowned musicians.
In 1993, he recorded the debut album with his Bojan Z Quartet. In 1999, he was engaged in multi-ethnical project Koreni with musicians such as Karim Ziad from Algeria, Kudsi Erguner from Turkey, and Vlatko Stefanovski from Macedonia.
His solo piano album Solobsession (2001) brought him wider worldwide recognition. On Transpacifik (2003) he started collaborating with American jazz musicians Scott Colley and Nasheet Waits, and continued on Xenophonia (2006) with Ben Perowsky and Ari Hoenig, as well as Frenchman Remi Vignolo.
He often uses the combination of acoustic piano with Fender Rhodes electric piano, playing them simultaneously, and recently is claimed to be the inventor of “Xenophone”, a hybrid instrument, based on the customized Fender Rhodes electric piano. It can be heard on Xenophonia.
In 2002 Bojan Z received the Prix Django Reinhardt for Musician of the Year from the French Académie du Jazz. In 2005 he was granted the Hans Koller European Jazz Prize as the Best European Jazz Musician.
Bojan Z has twice won the Victoires du Jazz prize in France, in 2007 for “Xenophonia” and in 2013 for “Soul Shelter” as the Best Album of the Year. In 2010 he produced and recorded Bailador with Michel Portal, Ambrose Akinmusire, Lionel Loueke and Jack DeJohnette.
He won the Grand Prix Sacem in 2017.
He has performed at Jazz in Marciac, Paris Jazz Festival, la Roque d’Antheron, Montréal jazz Festival, North Sea Jazz, Copenhague Jazz Festival, London Jazz Festival…

SIMON GOUBERT
Born 1960 in Rennes (France), Simon Goubert learnt to play the piano at the Age of 3 before switching over to drums with 10 years. He received tuition in Percussion at the Rennes music academy and the Versailles music academy, where he also studied harmony.
He started his career as percussionist with the ORTF´s Ensemble Polyphonique, and performed alongside Aldo Romano, Jacques Thollot, Bernard Lubat and Christian Vander.
In 1981 he formed his first group. In 1982 he formed “Spiral” with Arrigo Lorenzi and Jean-Claude Lubin. From 1982 to 1996 he played keyboards with Christian Vander´s groups Magma, Offering and in “Les Voix de Magma” Between 1987 and 1997 he had a regular trio with Michel Graillier and Albi Cullaz.
In 1991 his debut album “Haiti” was released, followed by “Couleurs de peaux” in 1993. From 1999 to 2002 he was in the trio “BFG” alongside Glenn Ferris and Emmanuel Bex. Since 1999 he is a member of Sophia Domancich´s quintet “Pentacle” and formed with her the quartet “Invitation”. Together with Sophia Domancich he played with former Soft Machine members Hugh Hopper and Elton Dean in “Soft Bounds” from 2004 to 2006.
In 2006 he formed the trio “DAG” with Sophia Domancich and Jean-Jacques Avenel.
Among many others he has also played Steve Grossman, René Urtreger, Alain Jean-Marie, Christian Escoudé, Jacky Terrasson, Bireli Lagrène, Michèle Hendricks, Riccardo Del Fra, Dave Liebman, Steve Potts, Babik Reinhardt, Laurent De Wilde, Andy Emler, Lee Konitz, Martial Solal …
In 1996, Simon Goubert was the first drummer to win the Prix Django Reinhardt from the French Académie du Jazz.

30 years after the first jam, Gary Brunton, Bojan Z and Simon Goubert are playing together on Night Bus (2019) and Second Trip (2020).

In 1988, in Paris, the double bassist Gary Brunton met the pianist Bojan Z while they were studying in a famous music school. At night, in the capital’s jazzclubs, they would listen with joy, to drummer Simon Goubert. In 2018, the three partners met again and started working together on Brunton’s compositions. Everything is spontaneous, sincere, simple and delicate… Perhaps this is what friendship is all about. 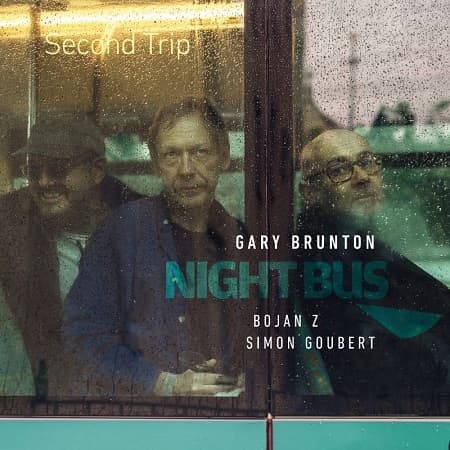